Beyond the Great Wall of China: Everything Else This Middle Kingdom Has to Offer 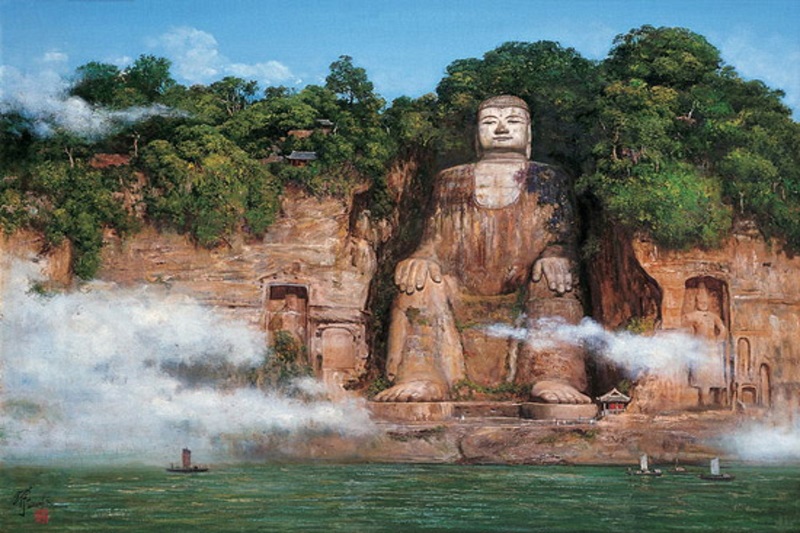 The first thing that comes to mind when someone talks about China is without a doubt the Great Wall of China. It truly is a marvel of mankind but there is so much more to China, from a gigantic Buddha statue to a sandless red beach. Let’s take a moment to look beyond the Great Wall of China and see all the other wonders this middle kingdom has to offer.

This astounding statue is the most elevated Buddha statue in the world making it one of the most favorite places to visit in China. Located in the Sichuan Province, this Buddha statue stands at a staggering 71 meters.

The history of this giant Buddha is quite interesting which adds more intrigue to this already amazing structure. In the 8th century, a Chinese monk believed Buddha had the power to calm the tumultuous water that caused several shipwrecks. As they began chiseling the cliff to carve Buddha, the debris deposited altered the water currents. Although a superstitious solution, his faith was scientifically grounded and Buddha in a way did calm the roaring waves.

Terracotta Warriors: The Army of the Dead

Back in 1974, farmers were digging a well outside Xi’an in China and uncovered the greatest archaeological discovery in the modern world. A life-size clay soldier dressed in war gear poised for battle. This led to archaeologists digging up thousands of terracotta warriors. The findings included swords and arrow tips in pristine condition.

The discovery was a part of the tomb built for Chinese Emperor Qin Shi Huangdi back in 221 BC. This underground treasure also houses the coffin of the emperor which is still shrouded in mystery. Archaeologists are yet to find the entry to the tomb but for now, the display of the clay soldiers is truly amazing.

Tourists and historians from all over the world flock to see these unique terracotta warriors. These relics set as a museum is one of the most unique places in China and is considered the eighth wonder of the ancient world.

The first thought is red sand but no, this red beach is not covered in sand at all. The red beach is covered with Sueda, a type of red plant. To be able to see this amazing wonder visit during the bloom season which is April and May.

This beach is part of the biggest reed marsh and wetland in the world. This mind-boggling beauty is home to over 260 birds and 400 wild animal species. Unfortunately, to protect this natural wonder most of it is closed to the public but a small section for tourists is all you need to gawk in amazement.

This valley is an impossibly blue river passing over a beautiful set of terraces. Set at the Jade Dragon Snow Mountain, this valley resembles a blue crescent moon from afar, giving it the name Blue Moon Valley. The locals also call it White Water River because when it rains the limestone rubble and white mud from the riverbed swirl up and turn the water as white as milk.

This valley is fed by the melting of ice and snow that trickles down the Jade Dragon Mountain. The unique thing about this valley is the water stays cold throughout the year and acts as a relief for the locals in summer. This freezing wonderland is one of the lesser-known places in China to visit.

Dujiangyan Irrigation System: The Reason for the Land of Abundance

This is the oldest irrigation system in the world situated about 45km north of Chengdu. The marvel of mankind is the sole reason for Chengdu gaining the title ‘Land of Abundance’ The area of Chengdu was constantly affected by droughts and floods and this irrigation system was a way to tackle that.

Now, 2,300 years later, Chengdu is thriving and this irrigation system is without a doubt one of the most favorite places to visit in China.

Hope this list lets you look beyond the Great Wall of China and visit these just as amazing wonders of China. All you need to do is book flight tickets to this middle kingdom. Remember travel is the only expenditure that makes you richer. So check out the iEagle website for the latest offers to book cheap flight tickets.

One thought on “Beyond the Great Wall of China: Everything Else This Middle Kingdom Has to Offer”